Memorial Day…….. a day to remember those who gave their lives for us….Memorial Day…..remembering the ones killed in action….. like my dad’s half-brother Roy Ruffin, young, handsome, 23 years old, from Columbus, Mississippi, killed January 3, 1945, in Belgium. Uncle Roy, a member of 1st BN 502 Prcht. Inf. 101st Airborne Div. jumps from a plane, for us……that young life ended while my granny is back home in Mississippi, praying for his safe return.

As I read on the internet about the 101st Airborn Div, I found “On 03 January 1945 2nd Battalion engaged in heavy fighting around Longchamps, Belgium. The Germans pressed forward and as many as forty jumpers, mostly from F Company, were rounded up and taken prisoner that day.” He was listed on the Casualty List 22 February, 1945.

An article, my mother kept in her big “Family Bible”, tells me: “He was one of the first to land in France June 6. He fought through the Battle of Normandy and later served in Holland before going to Belgium where he was killed in the Battle of Bastogne.”

His body, brought home, laid to rest in Tabernacle Methodist Church Cemetery in Pickens County, Alabama. Each year, nieces and nephews, place flowers and United States of America flags there, not because we knew him; he died before most of us now living were born, but because we honor him and his gift. 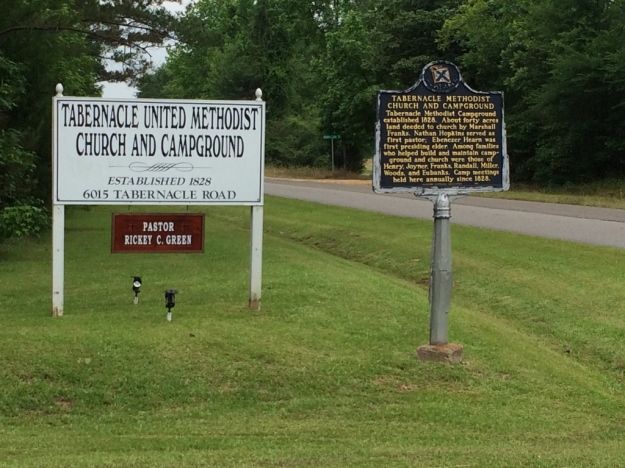 His mother, my “Granny Ruffin” is resting in a grave nearby….. …..when I visit …. if I close my eyes…. I can see a little petite woman…in a small bedroom, walls lined with floral wallpaper…..opening her cedar chest…..reaching inside…..taking the purple heart medal…holding in her hand close to her heart…..tears in her eyes. This, my friends is the difference in Memorial Day and Veterans Day.

THE REUNION AND PICNIC AT OGDEN’S MILL 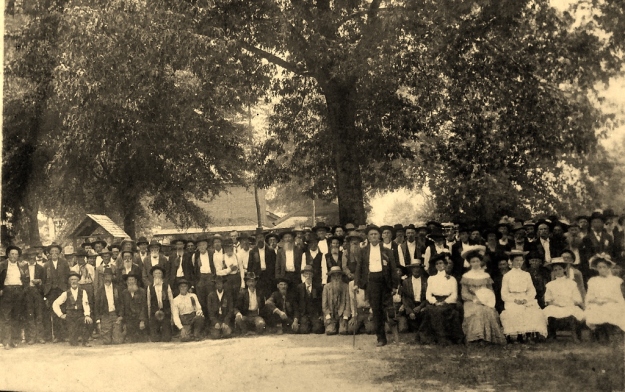 Saturday the 20th of August will long be remembered by the citizens in and around Cansler and Moscow. And the train of memories awakened from the slumbering past by the 1st reunion of veterans in Lamar County will be green in the hearts of all who remember the bitter struggle of twenty-six years ago.

On the 19th the survivors of Co’s K and G of the 16th Alabama Infantry met at Cansler bringing with them the simple rations of the soldier, and when the shades of evening were darkening gathered round their campfire, cooked their frugal meal, and after the repast was ended lit their pipes and around the smoldering fire recounted the deeds and memories of the campaigns in which they had figured so gallantly.

On the next morning a large number of citizens assembled and the matrons of the company, the gentle commissaries of all successful out door fetes came well supplied with baskets of the choicest viands.

At eleven o’clock the two companies were formed and under the command of Hon J. H. BANKHEAD, former Captain of Company K., marched in double file to the grove where the appropriate ceremonies of the occasion were to be performed, and halted in front of the speaker stand tastefully decorated with flowers and evergreens, surmounted by the motto “Co. K.” framed in an artistic garland of flowers, the work of Mr. G. E. BANKHEAD.

1st Sergeant D. W. HOLLIS opened the ceremonies with a few elegant and feeling remarks that sent a thrill of emotion throughout the large assemblage, and proceeded to call the roll of Company K in the midst of a profound silence. Twenty-two answered to the call and Sergt. T. M. WOODS accounted for the silent ones whose voices had been hushed forever in roar of battle, or the groans of the hospital. The frequent answer, killed at Fishing Creek, Shiloh, Murfreesboro, Chickamauga, Knoxville, Jonesboro, Newhope, Atlanta, told eloquently of how unfalteringly those gallant men who went forth from the quiet hills, and marched though the red path of battle to the leaden halls of death.

The roll of Co. G was called by Sergt. A. J. HAMILTON, now one of Marion’s noblest sons whose patriotism and public spirit is well-known throughout the land. Here was a touching episode. The first name upon the roll was that of the Sergt’s father who was among those who had laid down their lives upon the altar of their country. The gallant sergt’s voice quivered with emotion as he called the name and manly tears that brave men shed trickled down the veterans cheeks as they stood in line and listened to a repetition of the story of heroism and sacrifice that had glorified their comrades of Co. K. in the struggle that tired men’s souls. Eight responded to the roll, these were all who had been apprised of the reunion of Col. K. and had responded to the invitation of their comrades to be present.

As it was soldier’s day a still older reminiscent of the patriotism of our citizens was given to the audience. The roll of the Company of Capt. D. U. HOLLIS which had enlisted for the Indian War of 1836, up on the self same spot where their sons enlisted for our late war, was called by Sergt. HAMILTON from an issue of the North Alabamian, published at that time, and which has recently been found among Judge TERRELL’S (deceased) papers.  But one answered to the roll, Mr. JOHN W. GUYTON, an old citizen of this county, a venerable pure and patriotic man who is now going far down the western slope of life, adorned with shining habiliments of good deeds, and upright character and blessed with the reverence of all. The roll of this Co. will appear elsewhere in this issue. We will also give a list of Co. K. and G. in next weeks issue.

Capt BANKHEAD gave an interesting synopsis of the history of the Company, and was followed by Capt. BISHOP, of Co. G. who enunciated the principles of constitutional liberty for which those companies fought, and exhorted them to always defend them whenever the occasion should arise.

Capt. S. J. SHIELDS was then called to the stand and delivered an appropriate speech up on the occasion.

Dinner was then announced, and such a dinner – can we describe it – we are now as we were then too full for utterance, suffice it to say that it was all that could be desired, and was such a one as the people of Cansler and Moscow, always renowned for hospitality and good cheer, had busied themselves in spreading for delighted guests.

The entire entertainment was a success and all retired when the lengthening shadows were falling upon the hillside, sated guests from the banquet, and with heats filled with solemn and reverent thoughts of the brave who had passed away and those who still lingered upon the stage and proud emotions in view of the fact that they had been face to face with living witnesses of the valor and devotions of our citizens for half a century.  (SOURCE: The Vernon Clipper Vernon, Alabama, August 26, 1887 – transcribed from  microfilm by Veneta McKinney).