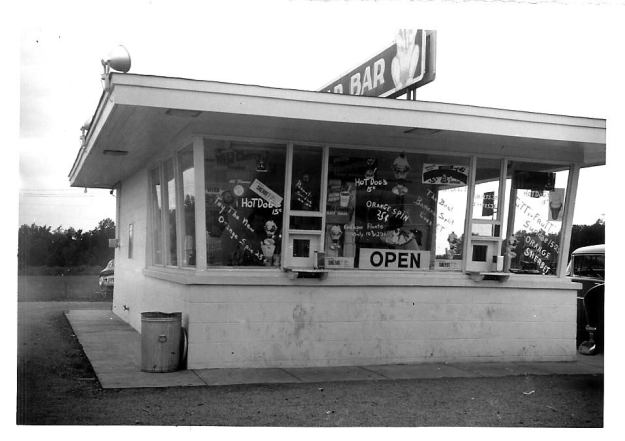 The picture above (courtesy of Mary Buckley Sutton and Nancy Buckley daughters of Mr. Frank Buckley)  is  the original building of our beloved Polar Bar.

In case you’ve not heard, the Polar Bar in Sulligent will be alive again soon. If you grew up here in the 1950’s -1970’s  for sure, I think you will find yourself feeling a little nostalgic and a little  excited, whether you admit it or not………for a small southern town less than 10 years after World War II ended, this Polar Bar was a big development and enjoyment for us all.

At first the Polar Bar existed only in the minds of friends, Corky Buckley and George Chaffin. If my memory serves me correct, George found the ice cream equipment for sale, now to buy equipment and start a new business, you had to have capital. That’s where, one of the dearest men I’ve ever known, came into the picture, Mr. Frank Buckley, yes, I must insert “Mr.”, his personality and attributes require respect. Corky and George went to Mr. Frank, I imagine at the Buckley Hardware Store, talked him into going with them to the Bank of Sulligent, to apply for a loan. The three were successful in getting the loan, and a partnership was formed, what had only existed in their minds became a reality for all of us in the Sulligent area to enjoy.

I’ve heard that Leon Hollis and Nig Hollis are making this revitalization happen. These Hollis brothers love this town having lived, worked, served here most of their lives if not all their lives. If you see them around town…share a word of thanks.

“We predict that one of the most popular spots in town will be the new Polar Bar which will open near the American Legion Hut out on the Vernon Highway just south of the city limits.

Frank and Corky Buckley and George Chaffin will be the owners of the Polar Bar. It will remain open from 10 a.m. to 10 p. m. to serve every kind of ice cream product, malted milks, etc. All of which sounds mighty good at the beginning of a summer which weather forecasters say will be the hottest in history.”  June 12, 1953 Vol. 4 No. 8 The SULLIGENT SENTINEL

Nell Rose Jackson Ballard began to work at the Polar Bar after it had been open several years. Nell later purchased the business. She was known for the best chili dogs. Some of my best teen age memories were at the Polar Bar. This picture was given to me by  Shorty Foster.

I ask you to tell us about your memories in  the comment space below.

4 thoughts on “THE POLAR BAR – A SULLIGENT LANDMARK”