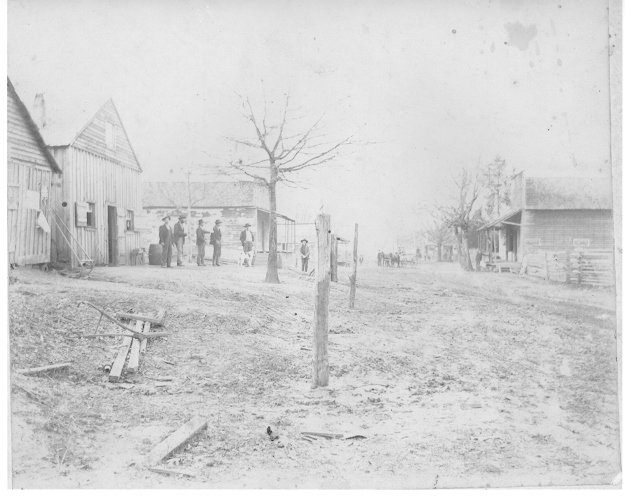 The Vernon Pioneer Vernon, Alabama May 26, 1876.   Transcribed from microfilm by Veneta McKinney.

It has been some time since “The Country North of Us” has had her say in your columns, and this brief communication is suggested, not from an overweening idea of the absorbing interest of any item it may contain, nor from a disposition to tantalize your readers by forcing my slack-jaw upon them, but from a simple and legitimate object: our section must not be ignored.

Our snug little village, the “chief manufacturing mart” of youthful Sanford, is just now passing through the crisis of dull times, nevertheless, the shrill whistle of Ray’s Factory and the lion like roar of Carter’s mill rocks, still reverberating o’er our hills and valleys, remind the hard-pressed, struggling yeomanry that “there’s life in the old land yet.”

The Millville delegation to your County Convention returned.  Our people are well pleased.  Although heretofore “tooth and tow nail” against Convention we fully endorse your action and pledge to your nominee an unanimous support.  You many say to aspiring Rads and Independents that there are no rations for them on this side of the Buttahatchie.

Wheat fields are suffering from rust.  Crops, gardens, etc. in this vicinity, are unusually late, but the beautiful weather and evident energy of our back-bone, the farmer, inspire a lively hope that all will be well in the end.

In an affray last week between JAMES A. THOMPSON and J. F. KENDRICK, the latter was knocked down with a heavy timber, and is now in a state of utter unconsciousness.  Some little hopes are entertained for his recovery, but it is feared at the expense of a complete mental wreck.  The blow fractured and mutilated his skull in a terrible manner and an absolute dethronement of reason will probably follow.  Kendrick at large.

A new capitalist has arisen among us in the person of Mr. B.  Imagine the surprise of this community, who thought him penniless, when he gave in to the Tax Assessor of Marion, among his taxable property, $500 in surplus gold!  Now, this youth lives in Sanford and I suggest that – Pennington assess him again.  Mr. B. wants to marry a rich girl.

Mr. JAMES M. RAY is experimenting with German Millet and Chufa.  JNO. II, still selling goods, while GREEN —- out to the weary wayfarer his proportionate allowance of the “happy come.”

I stepped in to see JAS. A. DAVIDSON & CO. the other day and found James at his post, transacting business most assiduously.  There was also in the house a venerable gentleman, who I found to be a monomaniac on the subject of quizzing.  Judging from my personal appearance he must have mistaken me for a city top or a commercial traveler.  I was dressed in a handsome suit variegated homespun.  A pair of red brogans adorned my southern extremities, while I was bounded on the north by a beautifully dilapidated beaver – relict of the 15th Centennial of Christ.  The old gentleman opened his battery upon me at once.  After a few moments of idle sparing I retired in dismay.  Vowing vengeance, I determined that if I ever met that gentleman again I would present him a subscription to the Pioneer and turn him over to the tender mercies of the Daily Dotter.  By the way, your D. D. passed through here on the 14th going North.  If he halts this side of the Centennial Exposition Grounds you’re in luck.  Mere anon.