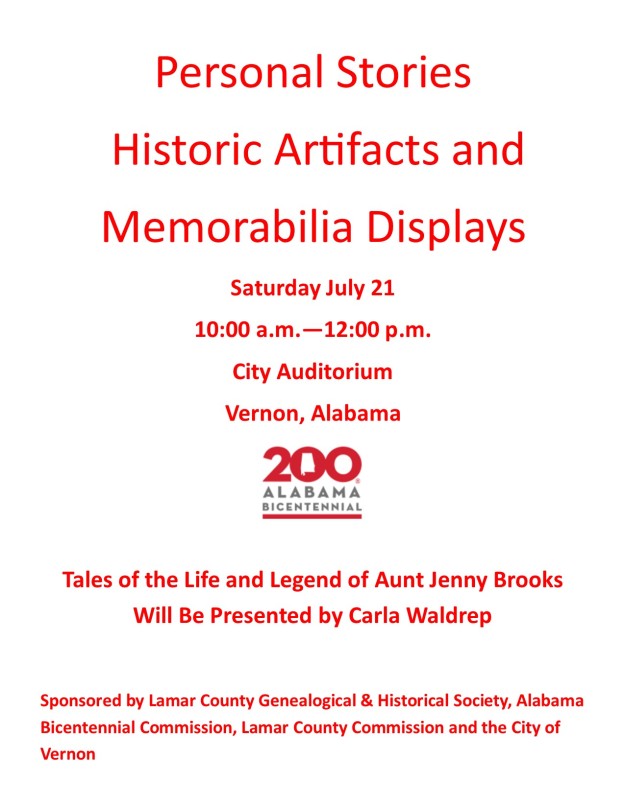 On Saturday, July 21, 2018 Carla Waldrep will present stories of the life and legend of Aunt Jenny Brooks.  Edward Herring wrote “Willis Brooks, Jr., was born April 3, 1854 in Alabama, the son of Willis Brooks Sr., and Louisa Elisabeth Jane Bates. Willis Sr. was a saddle and boot maker and Jane or “Jenny” Brooks was a beautiful, blue-eyed, half Cherokee woman, twenty years his junior. Willis and Jenny raised their large family in the rugged mountains of southwest Lawrence County and operated a road house for travelers of the historic Byler Road. During the war of Northern Aggression, this area of North Alabama was a hotbed of Confederate discontent. The hill country of Northwest Alabama was full of “Tories,” or those opposed to the Secession Convention in Montgomery and who wanted to remain loyal to the Union, or at least to remain neutral.  It was suspected that Willis Brooks had been giving aid to a number of Tories in the area. For this perceived act of treason, sometime in late 1863 or early 1864, a renegade band of Confederate Home Guards tortured and killed Willis and his oldest son, John. This sparked the beginning of a blood feud that would span thirty years and lead all the way to Texas and Oklahoma.  The Brooks boys were just little shavers when their pa and teenage brother were killed. Jenny Brooks was left a widow with a newborn baby and large family to feed. Jenny Brooks gathered her young blood around her and all swore to avenge the deaths of their father and brother. “Aunt Jenny,” as she came to be known, would proudly say in later years that she “wasted many a keg of powder teachin’ my boys to shoot!” Eight men were implicated in the deaths of Willis and John Brooks and at least seven of the killers paid for their cruel deed with their lives. Aunt Jenny was said to have accounted for two of the men herself”.

Carla Waldrep, Historian, Herbalist, Story Teller & Librarian, Haleyville Public Library has been portraying Aunt Jenny (living history) for about 12 years.  Mrs. Waldrep said “From deep in the Black Warrior Mountains (now known as the Bankhead National Forest) comes the tales of the life and legend of Aunt Jenny Brooks. By way of a number events she became one of the most noted and famed individuals of North Alabama. Her life story is as rich and intense as any good novel, but it’s real. And then there are the legends and ghost tales. You can decide for yourself if those are real”.