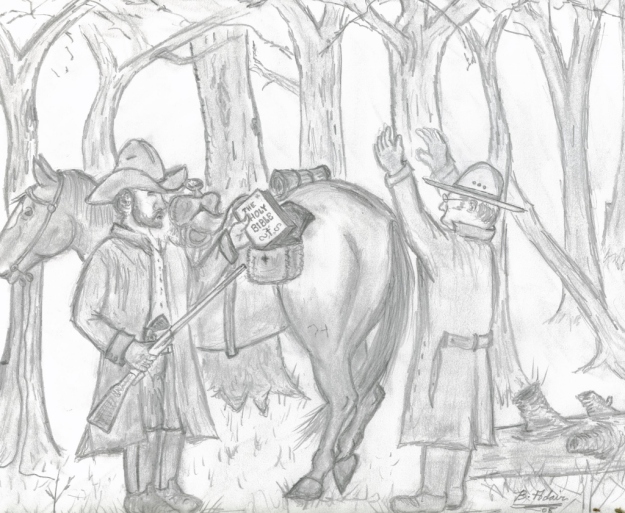 During 1889, the Rev. Beverly J. Spivey, a Methodist minister, served the Garrison Circuit in Alabama & Florida, consisting of the following churches: Corner Creek in Geneva County; a second near where Crestview, Florida stands; a third at Rose Hill in Covington County, and a fourth in the Johnson community near Elba, in Coffee County.

It was while he was returning to his home in Geneva County, Alabama after serving the Florida church in February of 1889, that the notorious bandit and train robber, Rube Burrow, accosted him and robbed him at his horse. This occurred near where Lakewood, Florida, now stands at a point one mile cast of Florala. Neither of the two towns was in existence at the time. Florala was known as Lake City and comprised a Masonic Lodge and two small stores. Preacher Spivey was riding horseback when he noticed a stranger emerging from the pine forest and heavily armed. Such meetings did not commonly frustrate travelers in those days, as nearly all footmen carried guns to hunt with and protect themselves. But Preacher Spivey noticed that this armed stranger was heading with haste toward him and before he could gallop off he was sitting under the muzzle of a menacing Winchester. The little circuit rider was ordered to dismount. After looking the stranger over carefully, the circuit rider realized that be bad come face to face with the south’s most notorious outlaw, known in the annals of crime as the Prince of Train Robbers. After seizing the horse, the outlaw asked the preacher what his occupation was. The circuit rider told him that he was a minister of the gospel. The robber seemed stunned for a moment and said to him, “Are you sure you are a minister?” The preacher replied “There are my books and papers inside the saddle bags. Examine them for yourself.” The robber reached his murderous hand into the saddle bags, and the first thing he lifted out was the Holy Bible. When his glaring eyes met it he turned as pale as death and trembled from head to foot. Gasping for breath, he finally said, “I hate to rob a preacher, but I have gone too far now to back out”.

Burrow mounted the horse and ordered the preacher to march ahead of him to a swamp about a quarter of a mile away. Inside the dismal swamp was a large mud hole filled with slimy water. After marching the preacher near this hole of oozy slime the outlaw halted him. When Preacher Spivey looked at his captor, he was still under the muzzle of the Winchester. He felt that his end was near and that the slimy hole would soon be his grave. He lifted his face and prayed to God to take care of his good wife, Piety, and the little children at home. He next asked Burrow if he was going to kill him, and the outlaw told him that he would not hurt him if he would obey his orders. After staying in the swamp until the sun went down, the outlaw told the preacher if he would not pursue him until the next day he would release him.The preacher agreed and was marched to the road again under the muzzle of the Winchester. When they arrived at the road, the robber threw the saddle bags toward the little circuit rider, wheeled the horse, arid galloped off toward Florida.

Preacher Spivey stood silent a short time listening to the fading sounds of his favorite horse bearing the outlaw away. He loved the horse; they had spent many days and nights together riding the long circuit in all kinds of weather, and they had come to understand each other like people. As the hoof beats faded dimmer and dimmer, the little circuit rider wiped the tears from his aging face and said out loud, “Goodbye Button,” which was the horse’s name. He walked sadly down the road toward the home of his good friend, Amon Miller, who lived three miles away.

When Preacher Spivey arrived at the gate of Anton Miller’s home, it was noticed that his horse was missing, and Mr. Miller inquired the reason why. The circuit rider replied, “Brother Miller, I am ruined. I have been held up and robbed of my horse.” Mr. Miller invited him inside and seated him by a warm fire. After listening to his awful experience at the hands of the notorious outlaw, Mr. Miller took his Winchester out of its rack and began to oil it. He also started oiling a big horse pistol he owned. After getting them in good working order, he told the preacher to eat supper and go on to bed so that he could rest as he was going to hunt down the robber and rid the country of his kind. But the preacher hastily reminded his friend of the solemn promise he had made the outlaw and wanted it honored. So Mr. Miller, realizing that the preacher’s word was at stake, promised to delay the pursuit until the next day.
At daylight the next morning, about twenty heavily armed men stood at the gate of Amon Miller’s home awaiting the signal to start. Mr. Miller led the posse and the chase was on. Someone inquired if the preacher was going along, and Mr. Miller answered, “No, Burrow could pick him out of the posse and kill him first because he is smaller than the others”.

As the men came to the forks of the road near where the town of Florala now is, they divided. Some went directly south and others toward the present town of Mossey Head, Florida. As they came near the L & N railroad tracks in Florida, they heard a train blow a stop signal. Later it was believed that Burrow rode the preacher’s horse to near exhaustion and made good his escape by flagging the train. When the posse reached the little place known as Mossey Head, they found a horse inside an old sheep pen. The animal was tied up, wet all over with sweat, and panting for breath. When the horse was examined by the pursuers, they found a note fastened to the saddle which read: “Please deliver this horse to Rev. B. J. Spivey of Elton, Alabama.” After some days passed, the horse was delivered to the little circuit rider none the worse because of its grim experience.

Sometime after Burrow robbed the preacher of his horse, his trail was picked up in Florida by the law, and he was routed out of hiding. At Flomaton he held up one of the L & N Railroad’s crack passenger trains single handed and robbed it of several hundred dollars. He was chased to Linden, Alabama, captured, and confined in jail there several hours, when he made a miraculous escape. But his new freedom lasted only an hour as he was shot down by a citizen before he fled the town.

It might be well to mention here that according to tradition, the notorious Rube Burrow once “holed up” for the night in the house now occupied by the Marvin Wiggins family. At that time, James Thompson was living there and Rube had just a few days before robbed the train at Flomaton. He was alone when he came to the Thompson home. The next morning he left, and was not seen in that vicinity again.

A few years after this incident, a group of men at Elton got together and built the present church. It has served in the Methodist field through a half century of trials and tribulations. In 1949 the people of nearby communities erected a Memorial Tabernacle at the site of Elton, in memory of Rev. B.J. Spivey. In the wake of this dynamic man of God have come eight sons and grandsons, who also became ministers. Submitted to Barb Carruth by Billy Wiggins. Tatum Bedsole, of Hacoda, wrote the following account of one of the Reverend Spivey’s experiences while he was a resident of Elton, Alabama.  An attempt to locate descendants of Tatum Bedsole was unsuccessful.